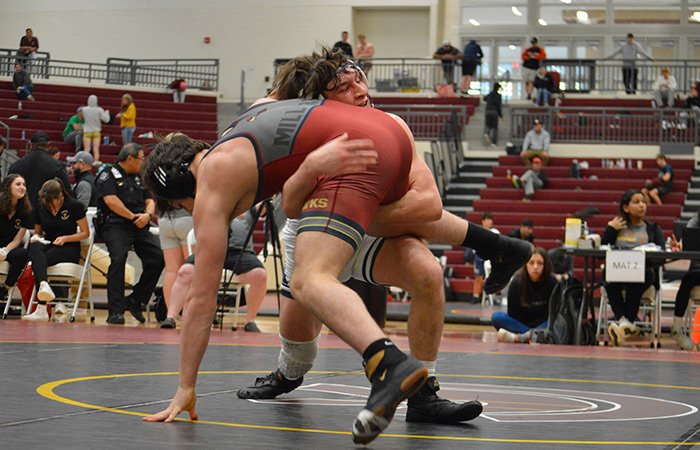 While 29 schools were represented, three local programs combined to win 11 of 14 boys weight classes during a Class 5A sectional Feb. 5 at the LakePoint Sports Complex.

Cass, this season’s 5A duals winner, produced a whopping seven champions, meaning half of the boys first-place finishers in the sectional were Colonels. In keeping with their duals success, Cass dominated in the light weight classes, taking the top spot in six of the seven lower divisions.

They were joined at the top of the podium by a trio of Woodland wrestlers — Caleb Henson (152 pounds), Cole Cochran (160) and Champ Higdon (195) — and Cartersville heavyweight Shadre Hurst.

In girls action at the 5A sectional in Emerson, Anetra Witherspoon gave the Canes a champion at 197; Cartersville’s Elora Waterman came in runner-up at 102; and Cass’ Abigail Gentry placed third at 122.

Elsewhere, Adairsville advanced eight of its 12 sectional qualifiers to Macon, led by defending state champion Isaac Linley. The senior dominated his way through the 132-pound bracket during a 3A sectional at Lumpkin County.

Adairsville also qualified Howard Bailey (138) and Luke Story (285) as No. 5 seeds, along with Ethan Blome, who finished sixth in Dahlonega.

Outside of their champions, the Wildcats (six), Canes (five) and Colonels (four) combined to send 15 other wrestlers to the season-ending event.

Woodland, which is looking to extend its run of traditional state titles to four years, produced three runners-up — Carson Bailey (126 pounds), Colton Bishop (132) and Beau Jernigan (285) — at the sectional.

Behind Hurst, who is a returning state finalist, Cartersville will look to rack up points in the lower weight classes during the state tourney, as the Canes’ handful of non-champions came from the six lightest divisions.

As for Cass, only two of the Colonels’ 11 state qualifiers will enter Macon as lower than a No. 2 seed. Kriecg Roe (160 pounds) and Parker Dunn (182) both finished second at the sectional, while Eli Doolittle (152) and Tripp Adams (195) each came in sixth.