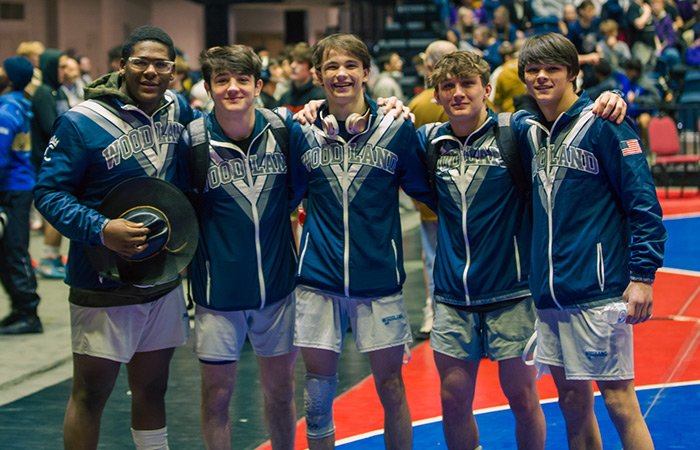 STAFF REPORT
Cass completed the Class 5A wrestling state championship double by edging Woodland and Co. in the traditional tournament in Macon.

Just like in the duals season, the Colonels ended a three-year reign of the Wildcats. This time around, Cass edged its rival 171-160.5, with Ola (152) and Woodward Academy (146) not far behind.

With finalists in 12 of 14 weight classes, Bartow-based schools claimed five total 5A titles. It was an impressive overall showing, especially considering 5A proved to be extremely top heavy, as only one other classification even saw three teams reach the 146-point mark.

North Carolina signee Cole Hunt and sophomore star Jake Crapps won individual championships for the Colonels at 120 and 126 pounds, respectively. It’s the third straight crown (second at Cass after winning one at Dalton) for Hunt, who dominated in a 17-1 technical fall victory, and the first for Crapps, who recorded an 8-4 win after placing third in 2021.

Seniors Caleb Henson (152 pounds) and Cole Cochran (160) ended their stellar careers with titles for the Wildcats. With his second-period pin, Henson, a Virginia Tech signee, wound up with three individual state championships and only one loss ever in a Woodland singlet. Cochran, who signed with nearby Chattanooga, edged Arizona State signee and three-time national champion Michael Kilic of Woodward, 3-2, in the finals for back-to-back titles.

Cartersville standout Shadre Hurst, who finished runner-up last year, capped his senior season with the heavyweight crown. The Tulane football signee earned a narrow 6-5 victory in the championship match to help the Canes place eighth in 5A with 64 points.

According to records posted to Trackwrestling, the handful of local 5A champions posted a combined 181-0 mark on the season. Crapps, Henson, Hunt and Hurst are all nationally ranked, with Henson checking in at No. 1 in his weight class.

In Class 3A, Adairsville placed sixth with 73.5 points. The Tigers were led by Isaac Linley, as the senior repeated, winning the 132-pound title this time.

Linley emerged with a 12-7 decision against Sonoraville’s Logan Moore. In the ensuing match, Adairsville’s Howard Bailey came in second, falling to Connor Free of North Hall in the 138 finals.

Bailey was one of eight runners-up from the county, as Bartow wrestlers came up short in seven of the 5A championship matches.

Overall, Bartow programs managed to produce 26 state placers. Those included Colonel Bryce Kresho (138 pounds) and Wildcats Carson Bailey (126) and Champ Higdon (195), each of whom came in third, as well as fourth-place-finishers Jaxson Owens (120) of Adairsville, Giles Turner (138) and Elora Waterman (102 girls) of Cartersville, and Kriecg Roe (160) and Parker Dunn (182) of Cass.