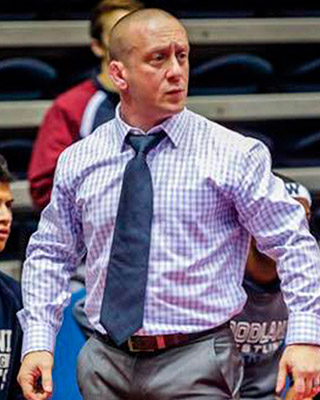 In only his second year with the program the Wildcats went from 34th in the state to qualifying for the state duals as the number 1 seed. In his third year, first as head coach the Wildcats capped off an incredible year by defeating number 1 and reigning Traditional State Champions Pope High School to win the State Duals Championship.

In this years to follow, Woodland became a fixture in the Dual State Championship match, making 7 consecutive finals appearances before that streak was snapped in 2018. During that span the team won 17 individual and team region titles and witnessed 15 individual State Champions crowned.

In college, Coach Tramutola wrestled at the University of [email protected] He was a 2X Southern Conference Champion and 2X NCAA Qualifier. Coach Tramutola was twice an All- American at the US Senior Nationals and qualified for the 1996 Olympic Trials where he placed 5th.

Coach Tramutola is a native of Miami, Florida where he was a 2X Florida State Finalist and the 1993 State Champion for Christopher Columbus High School.  He was a 6X Fargo All-American and finished 5th at the 1993 High School National tournament.