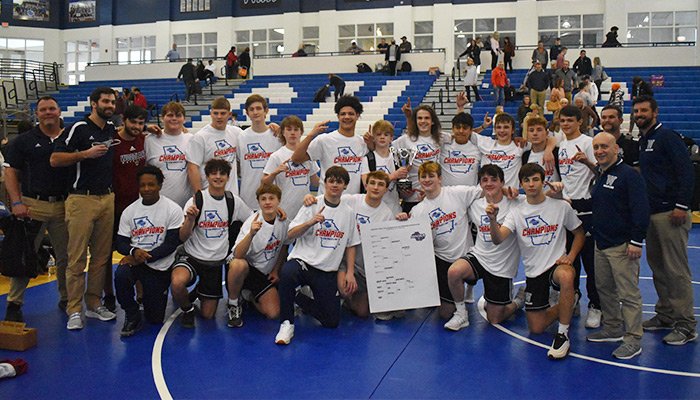 Woodland maintained its spot atop the mountain — not only in the county but in the entirety of Class 5A — winning a sixth state championship in the past three seasons Saturday at Macon. The Wildcats, who produced four individual state champions, have now successfully three-peated in both the duals and traditional tournaments.

Even still, Cass, Adairsville and Cartersville showcased this week the overall depth the county possesses in the sport.

The Colonels produced an incredible six individual finalists en route to earning second place in 5A, matching its runner-up finish from the duals season. Cass saw two wrestlers finish off unbeaten seasons in Saturday’s scaled-down version of the finals, which only saw 5A and 7A compete.

Earlier in the week, Adairsville’s strong recent run in 3A continued with a fifth-place showing. After Angel Banda gave Tigers head coach Ryan Torrence his first state champion last season, Adairsville saw two individuals win it all this time around.

While Cartersville didn’t pick up any state titles, seeing its lone finalist come up agonizingly close in the heavyweight division, the Canes managed to place 10th overall for the second straight season. Not a bad accomplishment, especially since last year’s finish came in a lower classification.

As expected, Woodland earned four of them in juniors Caleb Henson (152 pounds) and Cole Cochran (160) and seniors Jaxon Smith (195) and Caden McCrary (138). Henson, Cochran and Smith completed undefeated seasons. Meanwhile, McCrary finished his high school career with a 167-2 record, with the losses coming the past two seasons at the Knockout Classic in Florida.

“It speaks to their character; it speaks to their work-ethic; and it speaks to their leadership,” Wildcats head coach Adrian Tramutola said of the group. “… I told them, ‘You’re going to have to pin everybody you wrestle.’ That’s what the expectations are. They know that coming in. When you’re that good and you’ve established yourself, that’s what’s expected of you.

“That’s a responsibility that could weigh a lot on people. To have to go out there every week, every round and do it, but they do it. They do it every time. It speaks to who they are.”

Ironically, the Wildcats had a four-time (McCrary), three-time (Smith), two-time (Henson) and first-time (Cochran) champion. McCrary, who pinned Cass’ Tyler McKnight in the second period of the finals, became just the second wrestler in county history — the other being Woodland legend Kyle Gollhofer — to win four state titles.

“From the time he stepped on campus, you knew what you’re going to get from him,” Tramutola said of McCrary, who has signed with North Carolina. “… There’s only been two kids to do it ever in Bartow County, so it speaks volumes for what he did.”

Smith and Henson each pinned the entire way through their respective bracket. Henson’s final was the only match for either that even reached the second period. Smith, a Maryland signee, actually pinned all of his opponents in less than 45 seconds, including a 23-second championship bout.

“I don’t think people realize how hard it is to do what they’re doing,” Tramutola said. “They make it look so easy, because they’re so dominant. …

For Cochran, he joins his brother, Cody (a three-time winner), as a state champion. Like Henson, Cochran, who earned a 19-6 major decision over Cass’ Zach McKnight, will certainly be expected to repeat next year, but he’s used to that sort of standard.

“I think as a younger brother, seeing your older brother do it, you want to emulate it,” Tramutola said. “The expectation has been set — whether you want it to be or not.

“Happy for him. He’s had an incredible year — undefeated, beat multiple champs and kind of got out of his own way mentally. He really believed how good he was.”

As mentioned before, Cass’ two champions — Cole Hunt at 120 pounds and Noah Hoffmeier at 220 — were also perfect on the season.

Hoffmeier was so good that he literally pinned every opponent he faced the entire year. The senior earned his second state championship. He won it all his sophomore season, but after battling injuries last year, Hoffmeier settled for a state-placer finish as a junior.

“He finished off his career as a two-time state champ, which is awesome,” Colonels head coach D.L. Koontz said. “Believing in himself was the big thing. Last year, a little bit more self-doubt came in with him being injured.”

There was never any doubt that Hoffmeier would win Saturday. However, it did take him until the final minute of the match to keep his pin streak alive.

Said Koontz, “Obviously, Cole at 120 is just a freaking animal.”

Along with the McKnight sophomore twins, who wrestled extremely well against two of Woodland’s studs, Cass saw junior Bryce Kresho and sophomore Eli Doolittle place runner-up at 126 and 132, respectively. Doolittle dropped a 13-0 decision, while Kresho — a 2020 state champ — lost a heartbreaker, getting pinned when he led 6-5 in the second period.

With all four returning next season — along with freshman Jake Crapps, who placed third at 113 — the Colonels will absolutely give the Wildcats (and anyone else in 5A) a run for their money. This year, Cass wound up with 202 points to Woodland’s 243. For some frame of reference, only six other teams across all classifications scored 200-plus points.

“We put six in the finals, which is the most we’ve had since I’ve been at Cass,” Koontz said, noting that the point total is the highest for the program in more than a decade. “I’m sure it’s probably the most in school history. The good news is that we’re bringing every one of those back, except for Hoffmeier. …

“I’m proud of the way the guys wrestled. They pinned people all weekend. We brought nine [individuals]; Woodland brought 14. Up until this [final] round, we were pretty much right there in it team points-wise.”

Having come up short, as a team and individually for some, Koontz expects an even more intense wrestling room ahead of next season.

“I think that’s the fuel to drive you,” he said. “Nobody is happy with getting second place. Obviously, you want to be the champion. That might be the little spark that they needed to push them even harder. … Sometimes you have to experience those losses, so you can realize how much further you can push yourself. I think that’s probably what’s going to happen with them.”

Cartersville head coach Brooks Gayton is banking on the same thing happening to get Shadre Hurst a state title in 2022. Wrestling in the highest division, the junior came up just short of a remarkable comeback in the 285-pound championship round.

Trailing 9-2 with less than 30 seconds to go, Hurst fought back to get within 9-7 but ran out of time. When the match ended, Hurst appeared to be right on the cusp of earning a pin.

“He was milliseconds from pinning him at the end,” Gayton said. “He fought hard. He never gave up, obviously. You could tell that. It just didn’t go our way today, and we didn’t get the points when we needed to and came up two short.

“We’re real proud of him and just happy to have the opportunity to finish this season. He wrestled in the very last match in our division at the state tournament this year.”

As for Adairsville, which wrestled in the finals Thursday night, junior Isaac Linley put together a 3-1 victory in the 120 title bout. Later in the evening, senior Dalton Cornett — a runner-up at 160 as a junior — earned a 5-3 sudden victory in overtime to cap his career with a championship.