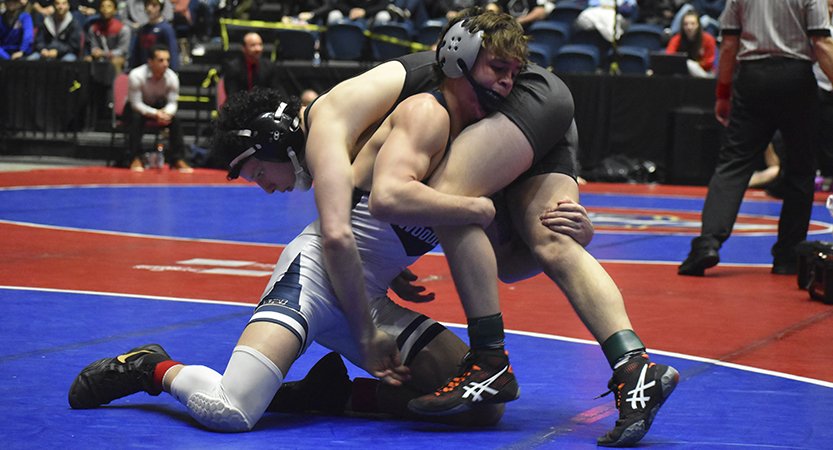 The Woodland wrestling team and girls cross country star McKenna Trapheagen have each earned plenty of recognition for their hard work during the 2019-20 school year. But Thursday saw the incredibly talented team and incredibly talented individual both pick up one more honor.

Wildcats wrestling was chosen as team of the year — across all boys sports — while Trapheagen was named the best girls XC runner during a virtual USA Today High School Sports Awards show, which honored those from the Atlanta area.

“It’s awesome,” Woodland head wrestling coach Adrian Tramutola said. “I’m not going to sit here and say we do it for the accomplishments, but it’s a bonus and proof that others recognize what we’ve accomplished. …

“It was a pleasant surprise.”

Meanwhile, Trapheagen, who will run competitively at Georgia Tech, said she was “shocked” by her win. It was almost like neither of them actually witnessed the greatness the Wildcats had on display this year.

In the fall, Trapheagen won her second straight individual Class 5A state championship, while helping Woodland to a fourth consecutive top-two team finish. Her time of 18 minutes, 27.67 seconds was 28 seconds faster than the 5A runner-up and also was the fastest for any female competitor across all classifications during the state championships at Carrollton.

The Class of 2020 valedictorian, Trapheagen certainly racked up several athletics honors during her Woodland career. Along with the USA Today award, she earned similar honors from the Atlanta Journal-Constitution and the Atlanta Track Club this season.

“It’s wonderful,” Trapheagen said. “I really hadn’t expected the more recent awards, especially the USA Today one. I was in a field with many, many other talented runners from Atlanta. I don’t want to say that I didn’t have confidence in myself, but I was very shocked to hear that I had won.

“I was really thrilled to represent Woodland and Bartow County in kind of a national way.”

Woodland wrestling was picked over fellow finalists Wheeler basketball and Grayson basketball. The Wildcats cruised to both the duals and traditional state titles in 5A, while simultaneously proving to be the unequivocal top wrestling program in the state across all levels this season.

Tramutola was a finalist for boys coach of the year, which was won by Wheeler’s Larry Thompson. Three Wildcats — Caleb Henson, Caden McCrary and Jaxon Smith — were among the 10 semifinalists for wrestler of the year after each won an individual state championship. McCrary, a junior coming off a third state title in as many years, was a finalist but lost out to Buford’s Nick Stonecheck.

While he would have definitely loved to see Woodland sweep the three categories, Tramutola appreciated the nominations and called winning the team award “icing on the cake.”

Tramutola actually missed seeing the award ceremony live. When he went back to watch it, he thought it was really cool that New England Patriots coach Bill Belichick, winner of a record six Super Bowls, announced the Wildcats’ win.

“It’s kind of surreal,” Tramutola said. “He was one of the presenters, and he read that out. It definitely added a little bit of a cool factor to it. You can’t argue with what he’s done. He’ll probably go down as one of the greatest NFL coaches ever. That was pretty neat.”

“To have someone that accomplished, respected and esteemed in the world of track and field, it was crazy to hear her say my name,” said Trapheagen, who watched the event live on her phone.

The ceremony was originally scheduled to be held in person but was forced online due to the COVID-19 outbreak.

The change didn’t blunt the significance of the moment for Trapheagen — who has learned to roll with the punches after her senior year was derailed, including having track and field season cut short, by the coronavirus pandemic.

“It’s not been an ideal situation, but with all of the support and all of the encouragement I’ve gotten from my high school coaches and the staff from my high school, I’m definitely leaving Woodland with very fond memories,” Trapheagen said. “I’m going to miss it so much, but I’m very excited for college. Being able to be recognized for my accomplishments in high school just makes me more excited for the future to see what’s next.”